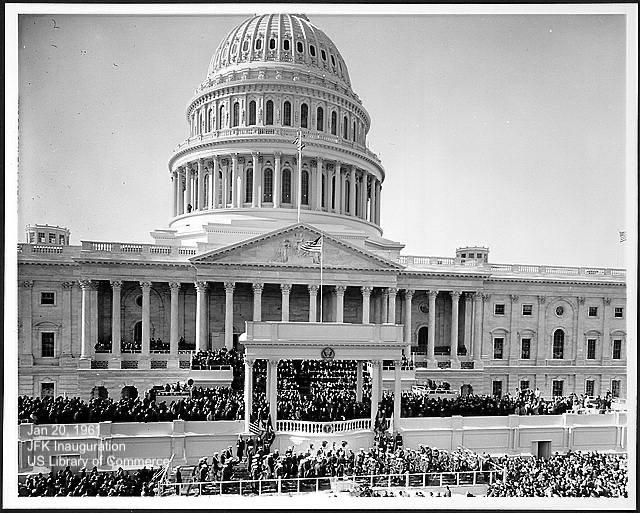 January 20, 2021 will mark the inauguration of Joe Biden a the 46th president of the United States.  The ceremony marks a long tradition of a peaceful transition of power, outside, and in the middle of winter.

There has been a wide range of weather conditions, in part based on different dates and locations. But with the variety of warmth to snow, the weather is even credited for resulting in the shortest presidency in history.

George Washington, our first president  is the only president to take his oath in two different cities (New York City and Philadelphia).  Meanwhile Franklin Delano Roosevelt (FDR) was in office when the 20th Amendment was passed. That changed the inauguration date from March 4th to on or around January 20th.

Here is a look at the weather for Washington DC expected in any year, recorded during past inaugurations, and a live weather widget can be found at the bottom to track the short term forecast and conditions.

(even in non presidential years)

1/6 chance for precipitation during the ceremony.

1/6 chance at least 1 inch of snow will be on the ground already.

Here’s a brief look at the history of presidential inaugurations:

The first oath of office taken by George Washington was in New York City.

John Adams inauguration was the second and last time in Philadelphia.

Thomas Jefferson became the first president to take the oath in Washington, DC.

James Monroe was the first to be ‘sworn in’ outdoors.

FDR, as 32nd president took his 2nd oath of office for the first time on the new established calendar date.

A lot has happened in between, so let’s look at the weather extremes. You might be surprised that despite changing the date to January 20, some of the most wintry events were in March.

For Ulysses S. Grant’s second term, the noon temperature was only 16°F with a record low temperature (at the time) for March of only 4°F.

It should be noted, Grant was a Civil War General that saw the importance of weather. In 1870 he signed a joint resolution of Congress authorizing the Secretary of War to establish the National Weather Service.

9.8” of snow with strong winds for William H. Taft. This forced the ceremony indoors.

Woodrow Wilson’s first inauguration. At noon the temperature was 55ºF

For Ronald Regan’s first inauguration the noon temp was 55ºF

Ronald Regan started his second term in the deep freeze.  The Polar Vortex must have made a visit without making headlines.  The noon temp was only 7ºF.

Coldest (for all dates):

President William Henry Harrison became the 9th president on March 4, 1841.  But he died 31 days later, after getting sick from his inauguration bravado.

At the time, his wife was too ill to travel, but he intended to show he was still a military hero.

Inauguration Weather: Cold and wet (little other description but likely mid 30s to near 40ºF)

Needless to say, the history books showed he developed a cold the day, but was diagnosed with pneumonia later on March 26, three weeks after that ill fated day.   It was on April 4th, when he passed away and became the first US president to die in office.

If your mother ever told you to hear a hat and coat or you will catch a cold, it may be traced back to the 9th US presidency that lasted only a month.

The moral of all of this:

For two hundred years we have seen all kinds of extreme weather in Washington DC during the winter.  Wear proper clothing and keep your Faith in the Flakes.