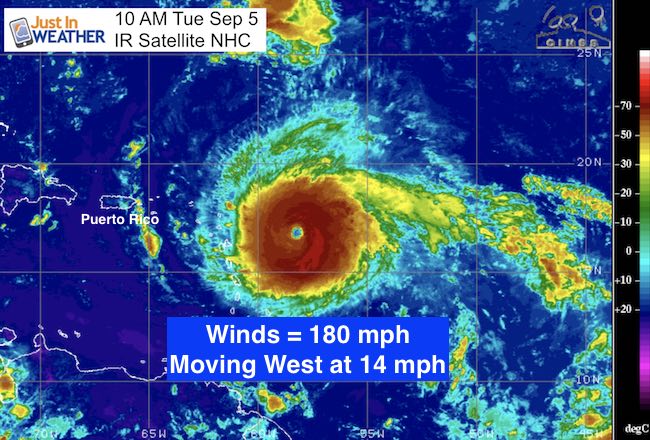 Hurricane Irma has reached a level that less than 1% of systems achieve. The latest air force reconnaissance shows that this storm has winds of 180 mph, placing it as a Category 5. Yes one hundred and eighty mph sustained winds. Gusts well over 200 mph. This is the strongest level of all hurricanes. It is moving west at 14 mph and expected to pass on the north side of the Northern Caribbean Islands.  This will bring catastrophic winds, storm surge, and rain. Waves themselves are 50 to 100 Ft high. The worst part will stay north of the Islands but will hit south Florida this weekend. The US mainland interest will be Saturday night or Sunday morning in south Florida. Expectation is to hold as a Cat 5 or slightly weaker Cat 4. But the pressure shown on the maps below show it has room to grow stronger. The GFS model is showing Miami as the target, but I am leaning with the south trend of the HWRF model hitting the Keys and then moving north up the Penninsula to on the Gulf coast side of Florida.  See the still comparison for Sunday morning below the animations.

This is the model I think is on point now… Passing south of Miami and hitting the Florida Keys head on. This would still put Miami on the strong side of the storm but away from the eye wall.  The turn to north will take place over Florida or on state’s Gulf Coast side.

I think this is turning to soon. Considering the trend to stay south, that is why the HWRF above looks like a better solution. I don’t agree with this one… Outlook- Where to next?

The trend south makes the north turn later. This would hit the southeast with flooding rain into Georgia and South Carolina… up the mountains. The impact on the Mid Atlantic would bring rain but a weaker storm after Tuesday or Wednesday. It should be noted that these forecasts are for the weaker side of the storm. The most intense impacts are on the right side of forward motion, which currently is the north side.

British and U.S. Virgin Islands except St. Croix…7 to 11 ft

Southern coast of Puerto Rico and St. Croix…1 to 2 ft

the northern Leeward Islands.  Irma is expected to produce total

rain accumulations of 4 to 10 inches with isolated maximum amounts

of 15 inches across northeast Puerto Rico and the British and U.S.

Virgin Islands, and amounts of 2 to 4 inches over southwest Puerto

Rico, the southern Leeward Islands, and Saint Croix.  This rainfall

may cause life-threatening flash floods and mudslides.