Every State in USA Had Snow Cover Today

Every State in USA Had Snow Cover Today 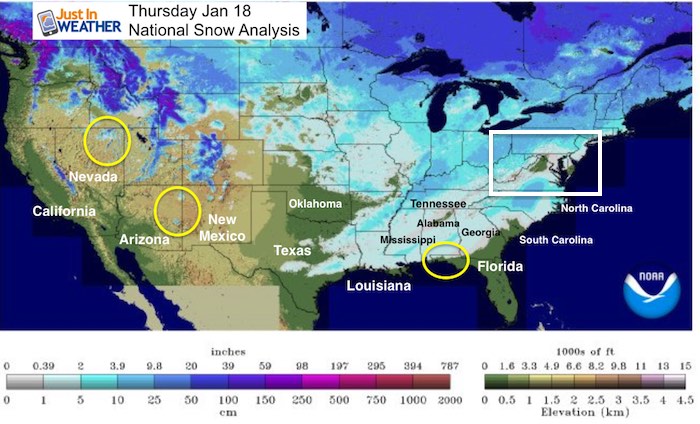 For the first time in nearly eight years, every single state in the United States had reported snow. The last time this happened was after the second of two blizzards we experienced in that special 5-day period to start this decade. It was February 12, 2010 and the snowpack was much deeper.

Temperatures this morning dropped to 11ºF in Baltimore and that sub freezing air made it all the way deep into Florida. Tampa had 29ºF and icy roads leading to multiple traffic problems. My parents were in south Florida and hit 40ºF. Imagine all the chilly grandparents calling north to complain…

This mark today is just a matter of snow cover, and that includes some unique locations. Overall, just half of the country has snow cover.

Baltimore received 1.3″ of snow on January 17:  Click here for the full local report

This includes Hawaii, not shown on the map above. But snow was captured on the visual satellite seen on the two highest volcanic peaks on Hawaii’s big island. These are highlighted with yellow circles below. The white surrounded the edge of the island is cloud cover.

The snow cover now is deeper than back in February 2010. Contrasted to much less snow for us compared to the same time frame.