Here we go again, for a fourth try.  NASA will attempt to launch a rocket launch tonight at 8:04 PM from Wallops Island, VA. There is a 40 minute window. Now we have a clear sky, but will the upper level winds cooperate?

This rocket is designed to created an artificial aurora high in the atmosphere to test high altitude conditions. Basically for us it will be a display of bright lights more than 200 miles above the ground.

This was postponed Friday, Saturday, and Sunday due to weather. The wind speeds both at the surface and aloft will continue be a concern. I will address the weather here:

The visibility  is NOT a problem for us inland today.  However, while the forecast has clouds breaking up over the launch facility at 8 PM, it was only just starting to do so an hour earlier as I prepared this report. 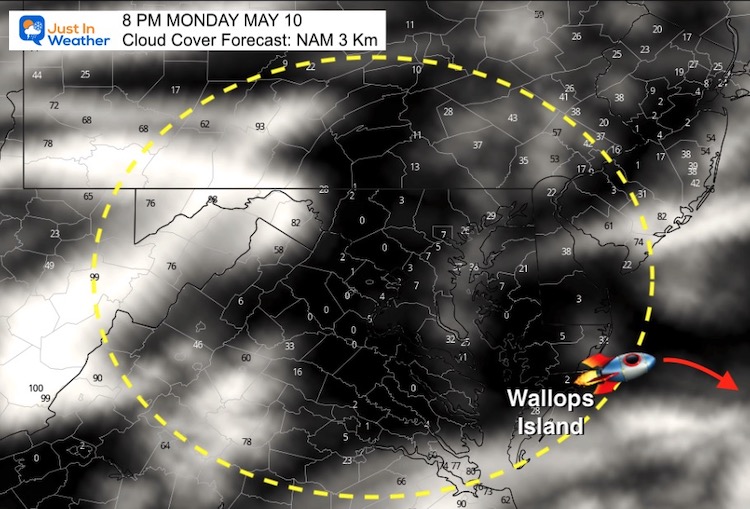 Clouds have broken up over most metro areas. More importantly though, a ribbon of clouds was lingering over the launch sight by coastal Virginia (just south of the Maryland line).

UPDATE at 7:54 PM: Launch on HOLD at T-15 waiting for better weather again.  See the weather below…

I set this for Wallops Island Flight Facility. Tap the location arrow and you should get the latest observations.

This looks to be too fast again as well, but I do not know the limits for this mission.

The launch was scrubbed tonight for strong winds…

This is the launch, visible shorty after lift off.

This is a fast sounding rocket. If the sky is clear to your east/southeast, then you may see this within 1 minute across much of our region as seen in this map. 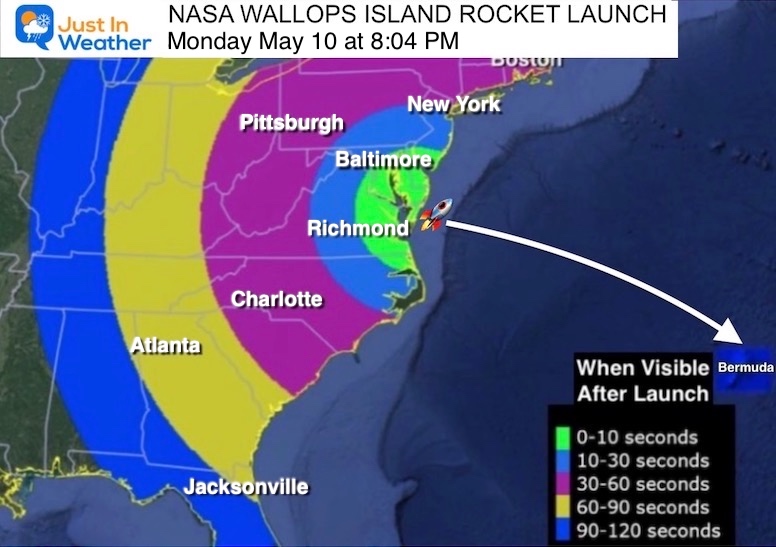 Vapor Tracers: What You May See

Barium Vapor: This will form two green-violet clouds that may be visible for about 30 seconds.

Scientists use vapor tracers primarily to study atmospheric winds in upper atmosphere and ionosphere. When released after launch, the tracers make it possible to directly observe the winds.

How To Watch And Track Updates

Live coverage of the mission will be available on the Wallops IBM video site (previously Ustream) beginning at 7:40 p.m. on launch day.  If you see a promotional video and no access to the live feed, then there is likely a delay.

If this does NOT occur tonight, they have more opportunities in the days ahead.  We would want a clear sky for much of the Mid Atlantic (and East Coast) for more to be able to view this.